Though it had been suggested as early as 1884 that all closed cycle air engine should be generically called Stirling engines after the inventor of the first practical example (see below), the idea found little favour and the various types on the market continued to be known by the name of their individual designer or manufacturer. Then, in the 1940s, the Philips company was searching for a suitable name for its version of the 'air' engine which by that time had already been tested with other gases. Rejecting many suggestions, including 'hot gas engine' ('gas engine' was already in general use for internal combustion engines running on gaseous fuels) and 'external combustion engine' (did not differentiate between open and closed cycles), Philips eventually settled on 'Stirling engine' in April 1945, though general acceptance of the term seems to have lagged a few years behind

The Stirling engine (or Stirling's air engine as it is was known at the time) was invented by Reverend Dr. Robert Stirling and patented by him in 1816[8]. It followed earlier attempts at making an air engine but was probably the first to be put to practical use when in 1818 an engine built by Stirling was employed pumping water in a quarry[9]. The main subject of Stirling's original patent was a heat exchanger which he called an "economiser" for its enhancement of fuel economy in a variety of applications. The patent also described in detail the employment of one form of the economiser in his unique closed-cycle air engine design[10] in which application it is now generally known as a 'regenerator'. 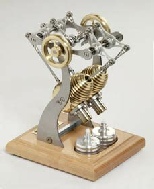